Instagram looks like it’s trying out another way to refine its Reels recommendations, with some users now able to add topics to their Reels uploads, in order to better categorise their clips. 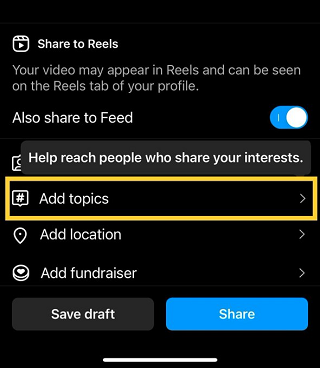 As you can see above, posted by user Jacki Pitkow (and shared by Matt Navarra), the new ‘Topics’ option aims to help you reach other users ‘who share your interests’.

That could provide another way for Instagram to showcase your content to a more engaged, interested audience, which could help to boost your Reels performance, and help you connect with more people who are interested in your brand/content.

It could also help Instagram refine its Reels recommendation systems, which is a key focus for the app at present.

Instagram, of course, really wants you to watch more Reels! Which is why you’re constantly seeing Reels inserted into every element of the app right now. Although Instagram seemed to have pushed their Reels obsession a little too far in recent weeks with users complaining of seeing too many unwanted posts. Maybe this is part of Instagram’s plan to scale back their unwanted content on feeds and define their targeting a bit more? Only time will tell…

LinkedIn Rolls Out Option to Pin Comments in Reply Chains

Here’s a handy update for LinkedIn users – you can now pin a comment within the LinkedIn post reply section, which could help to highlight the best responses, and spark more engagement with your updates. 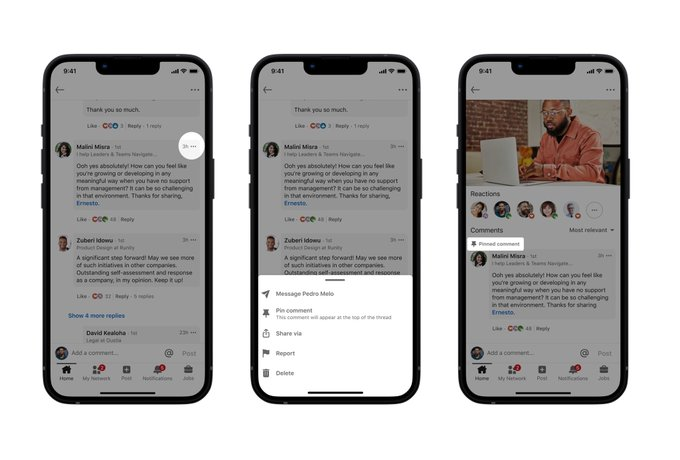 As you can see above, you now have the capacity to pin a comment from the three dots menu, which will then keep that specific response at the top of the reply chain. Which, as noted, could be a good way to guide the related conversation, or to simply acknowledge users that have engaged with your post in a creative or thoughtful way.

LinkedIn has long enabled business users to pin an update on their LinkedIn Company Page, while you can also ‘feature’ your own top posts at the top of your profile, which is functionally the same thing as pinning.

But now, you can pin specific replies as well, which opens up new considerations for maximising LinkedIn engagement, and interacting with your network in the app.

The option to pin comments is now being rolled out to all users, while you can unpin a comment via the three dots menu on a pinned response.

Twitter has this week launched the first stage of live testing for what’s arguably the most requested social media platform addition of all-time – the capacity to edit a tweet after posting. 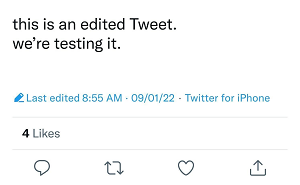 As you can see in this example, edited tweets will include a note at the bottom that it has been edited, while all users will be able to access tweet edit history by tapping on the pencil icon.

Which should alleviate some concerns around potential misuse of the option – though many people are already sounding the alarm on possible damages that could be caused by revised tweets.

So how will it work?

Initially, Twitter says that it’s launching a test of the feature with internal staff, before expanding the test pool to Twitter Blue subscribers ‘in the coming weeks’.

As explained by Twitter: “For this test, Tweets will be able to be edited a few times in the 30 minutes following their publication. Edited Tweets will appear with an icon, timestamp, and label so it’s clear to readers that the original Tweet has been modified. Tapping the label will take viewers to the Tweet’s Edit History, which includes past versions of the Tweet.”

So tweet editing won’t be available indefinitely, but for a limited time after posting. Let’s see how this one pans out! 👀