It looks like Musk is holding no prisoners as he begins his Twitter regime, with the company eliminating, reportedly, around 50% of its entire workforce, as it works to rationalise the business.

The Twitter transition team informed staff that they would receive an email that would let them know whether they still have a job or not. And while there are no official numbers as yet, internal managers have pegged the cull at around 50% of staff, with many long-serving experienced Tweeps bidding farewell via tweet.

In other news, it’s been reported that Musk will be introducing a new $8 a month ‘Twitter Blue’ subscription model, which includes verification ticks for all who subscribe.  As per Musk’ most recent tweets on his reformation of the platform, Musk now says that they’re planning to offer verification ticks to all users for $8 per month, to combat the class divide in the app.

Taking on the class divide by charging people $96 per year to highlight the amount of expendable income that they have is a fairly odd take, but I guess, when you’re worth $223 billion, everything is cheap, right?

But that’s not all. If you are willing to pay for this new, $8 per month, verification tier of Twitter Blue, you’ll also get:

The final element relates to the already present ‘ad-free articles’ element of the Twitter Blue package, which, interestingly, Twitter has also canceled, with participating publishers sent this notification overnight.

“Starting tomorrow, we will stop displaying the “Twitter Blue Publisher” label on any Tweets containing your articles. We will no longer be sending a Twitter Blue token when people on Twitter access articles from your properties. This will prevent the ad-free experience on your site from loading.”

Things continue to change rapidly under Musk’s ownership and we’ll keep you updated with any new changes as they come in. 👀

After announcing its coming group chat upgrade back in April, WhatsApp has launched its new ‘Communities’ update, which provides additional functionality for your group chats in the app.

As you can see this promo video, the new Communities process enables users to connect related group chats under a single banner, making it easier to stay in touch with broader context around a topic.

As explained by WhatsApp: “Communities like neighbourhoods, parents at a school, and workplaces can now connect multiple groups together under one umbrella to organise group conversations on WhatsApp.” 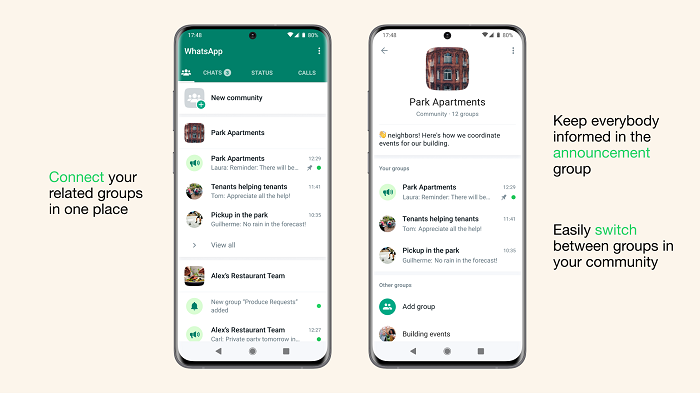 As displayed above, each WhatsApp Community will include a description of what the Community is for, as well as a menu of sub-groups within that Community that members can choose to join. That’ll enable all new ways of using the app to connect, while also facilitating new forms of discovery, providing more ways to stay in touch.

It could also facilitate new options for brands to build community in WhatsApp, by collecting brand-related chats together in one place. And with the noted shift towards sharing content via DMs, as opposed to social posting, that could be worth considering. The updated chat options also include larger file sharing, emoji reactions, group audio calls and more.

It’s a good update, which could provide more ways to connect with more people around topics of interest, with a variety of related chat groups under a single topic umbrella, facilitating more engagement opportunities.

The new Communities tab will appear at the top of your chats on Android, and at the bottom on iOS, in the latest version of the app.

Are you a fitness fanatic?

Snapchat has launched a new AR Lens integration, in partnership with fitness app Strava, which enables users to provide interactive, visual updates of their Strava activity. 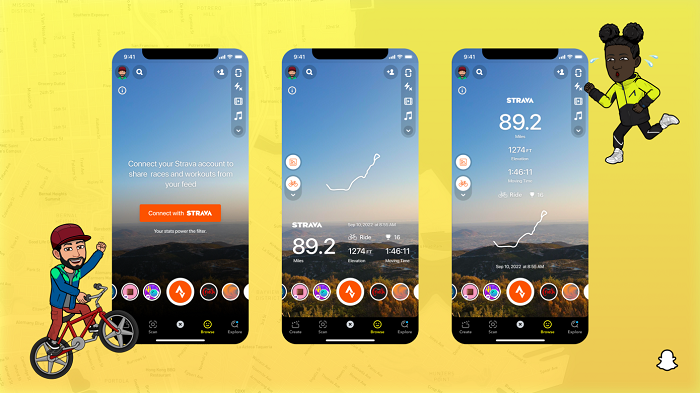 As you can see above, the new Strava integration provides new overlay options, with data from Strava then integrated into your Snap camera display, facilitating new forms of engagement with your fitness progress.

As explained by Snap:

“With a few taps, the Strava Activity Lens allows Snapchatters to take a Snap or post a Story that instantly tells the tale of recent workouts. Whether you’re walking around the city with friends or training for your next race, this AR experience helps you better tell the story of every effort on Snapchat.”

With over 100 million registered Strava users, the new integration will help provide additional exposure potential for Snap’s tools, which could also, importantly, play a part in helping Snap increase its appeal to older audiences.